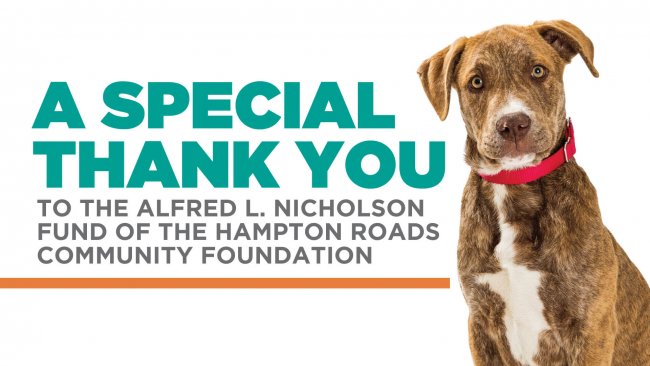 We are very excited to announce that the Virginia Beach SPCA has received a substantial grant of $100,000 for capital improvements from the Alfred L. Nicholson Fund of the Hampton Roads Community Foundation. The VBSPCA has been receiving grant funding from the HRCF since 2010, and the support provided has had a significant impact on our organization, ultimately improving our ability to provide compassionate care to both shelter and public animal populations.

The funds awarded to the Virginia Beach SPCA in 2020 will be used to complete the Dog Yard Expansion Project. This project increases the number of our current dog yards from 10 to 26, providing canine residents with over 8500 square feet of outdoor space. In addition to additional space, the project will provide the added benefits of more fresh air, sunshine and shade, increased safety, streamlined pathways to avoid unwanted animal interaction, and disease control. Our entire shelter team is thrilled with the difference this project will make for our large canine population. This project will be completed by mid-March, 2020.

“This grant came from an endowed fund that Captain Alfred Nicholson, who died in 1997, entrusted to his community foundation to forever benefit three area animal shelters,” says Linda Rice, vice president for grantmaking at the Hampton Roads Community Foundation. “As an animal lover and former SPCA board member, Captain Nicholson would be happy to see shelter dogs in his hometown enjoying their new play area while waiting for their permanent homes.”