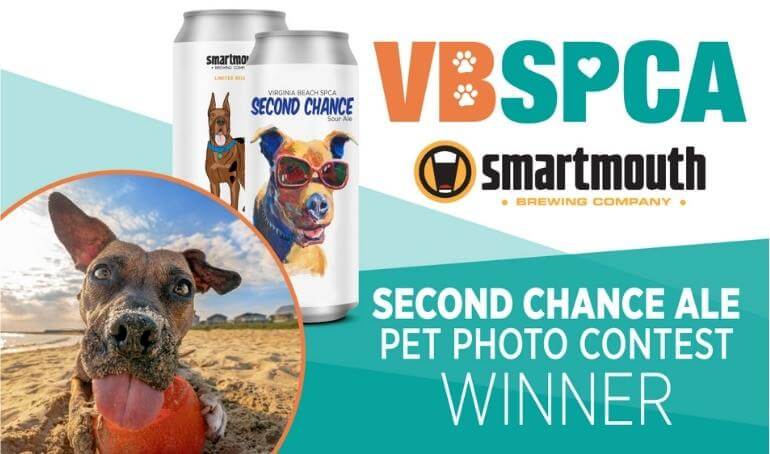 The votes are in, and the winner of our first ever Virginia Beach SPCA Second Chance Sour Ale Photo Contest is Benji! The contest was held in November to determine who would appear on the label of a special edition beer by local brewery, Smartmouth Brewing Company.

A total of 46 animals were entered into the contest including 37 dogs, 8 cats, and 1 duck. After a month of voting, the public narrowed down the competition to the top five finalists: Walter, Benji, Xena, Ashlie, and Prince Earl. The top five photos were then sent to our 2021 judging panel to determine the winner, which was no easy task with such cute and tough competition! Ultimately, the judges chose Benji as our Second Chance Shelter Ambassador.

Benji will be featured on the special edition label of Second Chance Sour Ale, a limited small batch production of Zoinks by Smartmouth Brewing Company. The label is being designed by VBSPCA Board Member and local artist Bill Campbell. The special label will be revealed in January – so keep an eye out for this exciting collaboration! Until then, we look forward to raising a pint of Second Chance Sour Ale with our supporters at our Puppy Bowl Party next February.

We’d like to thank our 2021 judging panel for helping us select the winner for this year’s contest: