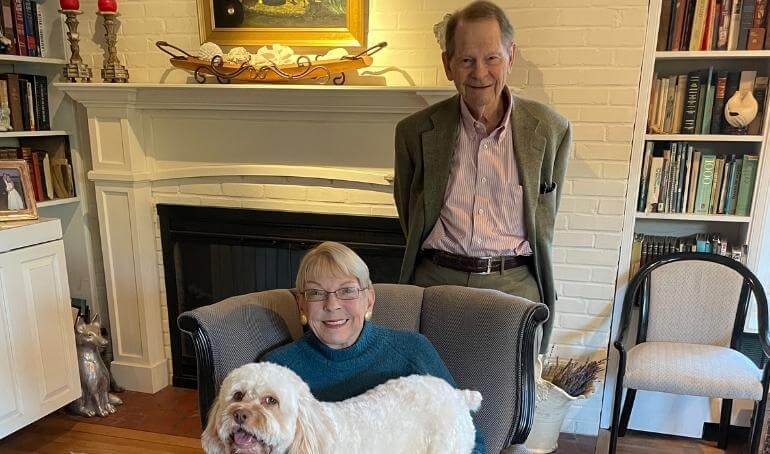 For Jan and Morris Fine, a house isn’t a home without a pet or two. Animals have been a part of both of their lives since well before they were married in 1976. Currently Ginger, a four year old Cockapoo, serves as resident canine at their Virginia Beach home, but one look around will tell you that Ginger has not been the only beloved pet in their family. Portraits of all of their animal companions who have crossed the Rainbow Bridge over the years are lovingly displayed in their house.

“We’ve either had cats or dogs or both for as long as I can remember,” says Jan. “They have brought us great joy. They have made it an exciting adventure.”

It’s not enough for the Fines to provide a good life to countless pets: they’ve dedicated their time and talents to helping the homeless animals of the Virginia Beach SPCA for nearly two decades. Their ongoing commitment to the mission of the VBSPCA is being recognized with the 2022 Lifesaver Award, which will be presented to Jan and Morris at our Wags & Whiskers Gala on Saturday, April 2, 2022. However, the Fines are very humble about their contributions being acknowledged.

“We’re not real sure why,” laughs Jan. “It’s a wonderful organization. We have been very, very lucky to be able to do the things we’ve done. We’re so glad that the VBSPCA is there to take care of all of our little critters.” 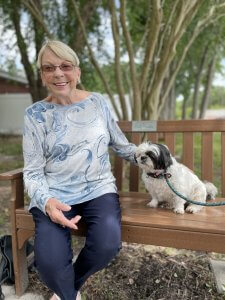 Jan first got involved with the VBSPCA when Mary Reid Barrow approached her about serving alongside her on the Board of Directors. It didn’t take much convincing – she said yes right away. The VBSPCA is one of several nonprofit organizations where Jan has volunteered in addition to her long career history that includes secretarial work, proofreading, owning a store, and being a mother of three. While Jan devoted more than 15 years of service as a VBSPCA board member, she ended up bringing Morris along for the ride.

“I kept offering his services,” Jan chuckles. “He’s been a big help.”

That’s no understatement. One of Morris’ largest contributions involved a sizable bequest from a local veterinarian who passed away. As a lawyer who has been practicing law for 66 years, Morris took on what he describes as “a monstrous crusade” due to an issue involving the donor’s intent for that portion of his estate. Morris donated his time and spent years representing our organization. “It was an interesting case,” says Morris. “It took some muscling and going to court many, many times.” His perseverance paid off: the money was eventually awarded to the VBSPCA.

In addition to the work they’ve already done for the VBSPCA, the Fines will also leave a legacy of their own. “We set up a fund at the Hampton Roads Foundation,” explains Morris. “It provides an annual amount of money to the operations of the VBSPCA. That will be there after I am gone and possibly even after my wife, who is much younger than I am. And prettier, too!”

When asked about all of their involvement and contributions over the years, it’s hard for the Fines to pinpoint a memorable moment. But their fondest recollections, not surprisingly, are connected to the animals that have been brought into their lives through our shelter. There’s the time they wanted to adopt a small dog from the VBSPCA shelter, only to come home with Scooby, a German Shepherd/Rottweiler/Labrador Retriever mix. Or the three cats that their oldest son, Rob, adopted from the VBSPCA.

“All these animals that were part of our family… all of our children and all of the people in our family are animal people,” says Morris.

“We’ve loved some [animals] more than others,” jokes Jan. “Our daughter Beth has puppies who, so far, have messed up at least two couches, and a chair, and a rug… but they’re still allowed back!”

Something tells us that an animal would never be turned away from the Fine household.

“Putting the right animal with the right family in a happy forever home is very special.” – Jan Fine