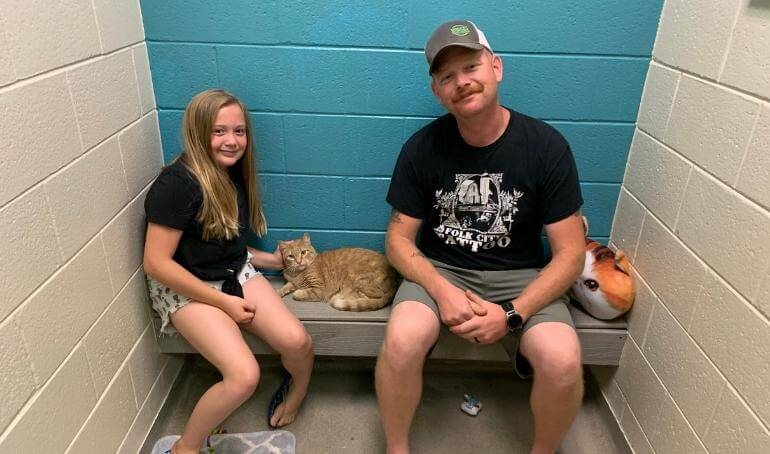 Every single animal that comes through our shelter has a story. Some are complex, many are sad, but all of them get better the minute they arrive at the Virginia Beach SPCA. Gouda arrived at the VBSPCA in May of 2021. His previous owners surrendered him because another cat in the home did not appreciate his playful nature. The two year old orange tabby kept getting looked over at our shelter until a special little girl named Ella visited him. After two months in our care, Gouda had finally found his home and was adopted in July. We recently caught up with Ella to get an update on Gouda.

How did you know Gouda was the one for you?

My mother called me and said she was looking at cats while at work and we should get one. My dad was not thrilled with this idea at all. See, my dad is a dog person and has never liked cats. I immediately went to get my phone to look at the VBSPCA’s website and saw this beautiful tabby boy named Gouda. I knew he was the cat for us because my mom owns a charcuterie business. I also read that he did not like other cats, which was great because we have two dogs and I knew he would like them. The next morning, my mom and dad took me to the VBSPCA to go look at Gouda. I immediately fell in love with him and so did my mom. I even sweetened the pot by saying that I would pay for all his adoption and set-up fees, but I asked my mom and dad if they would help me with the food because I don’t have a job and he needs to eat.

How is Gouda doing in the home?

Gouda has two new brothers, Smokey and Bandit, the Mini Australian Shepherds. They have become good friends and play all the time. Gouda thinks he is an Aussie, even greeting us at the door with his brothers. He has another brother too which he is not sure about. Red Beard is a Bearded Dragon who constantly stares at him wondering what he is doing in his room and where this furball came from.

What sort of activities do you and Gouda do together?

Gouda has a hammock that sits in the window, so he is comfortable watching TV with the family and his crazy brothers. He likes to play with my dad every night and will not go to sleep until my dad and mom kiss me goodnight and my brothers jump all over my bed. He also likes to be put under the covers with me to sleep at night. He loves to have his belly rubbed just like his brothers; he even tries to take their bones from them and gets jealous when he does not have one of his own. Whenever he wants pets, he shakes his tail and bounces all over the house until you pay attention to him.

How has Gouda enriched your lives so far?

My Dad, even though he did not want a cat, thinks that Gouda is a great addition to the family. My Mom is smitten with him and even gets a little upset that Gouda will not sleep with her, but he does make sure that she works out every morning, even critiquing her form on the Peloton.

We would have never found him if it were not for the great people at the VBSPCA and the time and effort that they put into every animal. I think that people need to adopt more shelter pets because they are amazing and need good homes, even though Gouda has become more dog-like than cat-like.