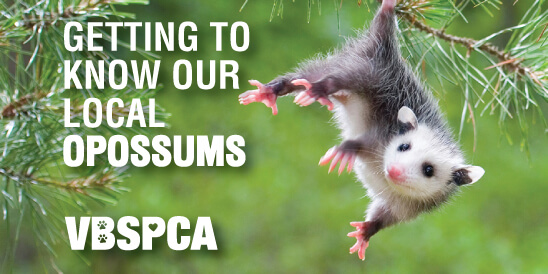 The Virginia Beach SPCA’s Wildlife Program cares for a lot of local wildlife, including the Virginia opossum. More than 65 species of opossums exist in the world, but the Virginia opossum is the only surviving marsupial in North America and Earth’s oldest surviving mammal with fossil remains dating back over 70 million years. Despite this unique status, opossums have always had a bit of a PR problem since they were first documented by John Smith in Jamestown. With quite a few distinct characteristics, an opossum has more teeth than any land mammal on the continent (50), opposable thumbs on their hind feet, and a hairless, prehensile tail. Many people don’t like having opossums around, but opossums help out a lot more than one might think. These nocturnal introverts are very adaptable when seeking shelter and are attracted to areas where they can easily find food and water. In return, opossums rid our neighborhoods unwelcome and harmful pests that would otherwise contribute to the spread of disease. Your feelings of aversion may turn into acceptance after learning more about this misunderstood marsupial.

One major benefit to the presence of opossums is that they eat ticks. Ticks spread dangerous Lyme disease that can infect animals and humans alike, however opossums are extremely efficient in eliminating these creepy crawly parasites. In fact, a single opossum can consume between 4,000 to 5,000 ticks in a single season. Rick Ostfeld, a senior scientist at the Cary Institute of Ecosystem Studies who has written about Lyme disease ecology, explains that opossums essentially protect our health. “In a way, opossums are the unsung heroes in the Lyme Disease epidemic.” Opossums groom themselves like cats killing over 95% of ticks they encounter, in stark contrast to the ticks that are carried around on other wildlife contributing to the spread of Lyme disease.

Beyond eradicating ticks, opossums are valuable in maintaining healthy ecosystems. Their diet also eliminates pests like cockroaches, rats, mice, and even carrion (dead animals). Opossums also enjoy trash, which hasn’t helped their reputation; however, this nuisance behavior also encompasses the consumption of spilled garbage and overripe fruit left on the ground. So they may eat your garbage, but they also minimize it.

Far from being a nuisance, opossums are also advantageous for gardeners because they love to eat snails and prey on slugs, insects, and sometimes small rodents. And for those of you who fear snakes, the National Wildlife Federation emphasizes that having opossums around can minimize chances of encountering venomous species close to your home. Opossums actually prey on venomous snakes and are partially or totally immune to venom from the Eastern Copperhead, Northern Cottonmouth, and Timber Rattlesnake, all of which reside in Virginia.

However, despite their immunity to snake venom and prehistoric roots, these hardy neighbors have a below average survival rate. Opossums can have up to 20 babies in a litter, but fewer than half survive to adulthood. Even adult opossums have one of the shortest lifespans for mammals of their size, living only 2-4 years. Opossums are generally slow moving and cannot outrun predators. Therefore, if they cannot deter a perceived threat, opossums will resort to playing dead. Playing “possum” is actually an uncontrolled response where the opossum becomes paralyzed, saliva will foam at the mouth, and the animal will emit a foul odor. Thie paralysis can be be triggered by a moving car, which means roadways pose a constant threat. If left unharmed, the National Wildlife Federation reports that it takes about 1-4 hours for a catatonic opossum to recover.

Many people worry that seeing an opossum out in daylight means it is carrying rabies, but that is often not the case. While there have been rare cases where opossums have tested positive for rabies, their body temperature is generally too low for the virus to exist in their system. In fact, the National Opossum Society says that “Opossums are more resistant to rabies than any other mammal,” including humans. If you see an opossum in your yard, don’t be alarmed; however you should be aware of your own pets to avoid any animal confrontation. The Humane Society of the United States explains that opossums are not aggressive animals and their open-mouth, defensive hissing is merely a bluff to look vicious. Opossums are generally docile and simply want to be left alone. In the meantime, you can prevent opossum interaction by using tight fitting lids on garbage cans, not leaving food outside overnight (including pet food), and remember to pick up any fruit that has fallen from trees or any other “leftovers” in your yard.

Opossums seem to have developed the perfect alias for sanitation superheroes, quietly doing the ecosystem’s dirty work, eradicating ticks, protecting gardens, and even reducing venomous snake populations, all while being cast as a nuisance. Wherever they are, opossums are valuable assets to any habitat. However, tolerating our hidden helpers doesn’t mean inviting them over. Remember to keep your yard clear and your trash secure. Also, please have compassion for our local wildlife and avoid collisions whenever possible. If you come across an injured opossum, call the Virginia Beach SPCA Wildlife Referral Line at 757-263-4762. Even deceased opossums may have babies in their pouch that need assistance.