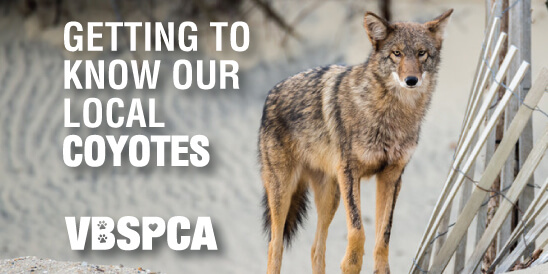 While coyotes may not be brand new to Hampton Roads, sightings have become more frequent in the past few years. Meghan Conti, a supervisor with Virginia Beach Animal Control, told the Virginian Pilot, “We get calls about sightings from all over.” In 2017, animal control in Hampton had 50 calls for suspected coyotes, compared to 17 calls the year before. People have also reported coyotes around Buckroe Beach, Newport News, Williamsburg, York County, Fort Story, the Virginia Beach boardwalk, and First Landing State Park. Erik Molleen, resource specialist at First Landing State Park, told the Virginian Pilot that coyote sightings have increased in the last seven or eight years, but he’s never heard of coyotes being aggressive to people.

What exactly are coyotes?
Coyotes are in the same family as wolves, dogs, foxes, and jackals. They are about as big as medium sized dogs, with narrow snouts, bushy tails, and thick fur. Thought of as a carnivore, coyotes are actually omnivores and highly opportunistic feeders. While the majority of their diet consists of small mammals, coyotes have also been known to eat fish, frogs, insects, fruit, berries, nuts, and even garbage. Coyotes can also feed on deer (usually fawns), and they sometimes feed on livestock. Coyotes are very smart creatures, hence the moniker “wily,”  and they have a heightened sense of hearing, smell and sight.

Should you be concerned about coyotes?
There are no reported altercations between a coyote and a human, likely because coyotes typically avoid human interaction. According to Mike Fies, a wildlife biologist with the Virginia Department of Game and Inland Fisheries, “Only a small percentage of coyotes are dangerous, and when aggression does occur, it’s usually triggered by the presence of a dog the coyote views as competition in its territory.” “The biggest problem they cause in my experience has just been, well, call it hysteria,” Todd Engelmeyer, biologist with the VDGIF said to the Daily Press. “Occasionally, a coyote causes more real problems — attacking a domestic pet or raiding vegetable gardens, but even that is a very rare event,” he said.

A concern voiced by local residents is a fear that a coyote seen in daylight is an indication of rabies. The VDGIF points out that this is likely not the case. Nocturnal animals like foxes, raccoons, opossums, and coyotes can be active during the day, especially during breeding and mating seasons. March through July is pup-rearing season for coyotes, which can account for daytime activity. Pup-rearing season could also contribute to an appearance of coyote hostility, especially if coyotes are protecting their young from an apparent threat. However, coyotes can carry rabies, as well as distemper, parvo virus, and mange, so keep an eye on your pets whenever they are outside and make sure all vaccines are up to date.

Coexisting with Coyotes
Coyotes are local wildlife and they are here to stay, and the best thing we can do is learn to live with them. The VGDIF cautions that, “the best way to prevent them from becoming a problem is to not give them a reason to come.” Don’t leave food outside, keep your trash secure, do not leave pet(s) unattended, and make sure to keep your cat(s) inside. More tips can be found here: Tips from the Virginia Department of Game and Inland Fisheries. For additional information,  Gloucester County offers tips to protect livestock, which can be found here: Tips to protect Livestock.

Experts also caution that learning to live with coyotes does not mean befriending or feeding them. Coyotes are still wild animals, regardless of where they take up residence. If you happen to see a coyote, please call the Virginia Department of Game and Inland Fisheries. If the coyote appears sick or injured, contact your local animal control.